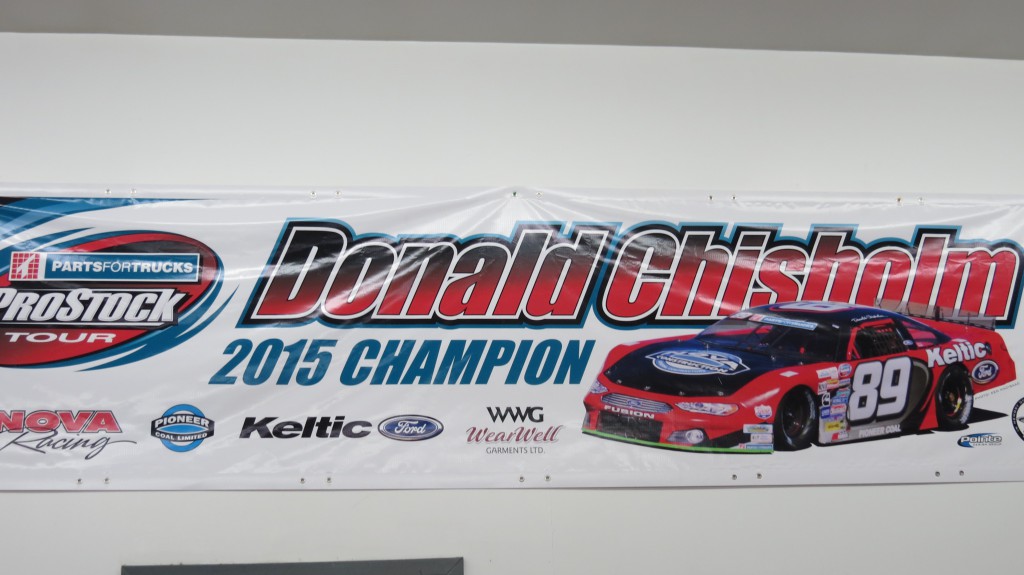 We were fortunate to have George, the crew chief for Donald Chisholm, not only tell us some amazing stories but let me take some pictures of their shop. I never asked Andrew, my camera wasn’t with me. There were some nice cars at Rollie’s shop as well. They will no doubt be strong rivalries.
Donald Chishom was the 2015 Parts for Trucks Pro Stock Tour Champion. Here is his banner proudly hung up in their shop. 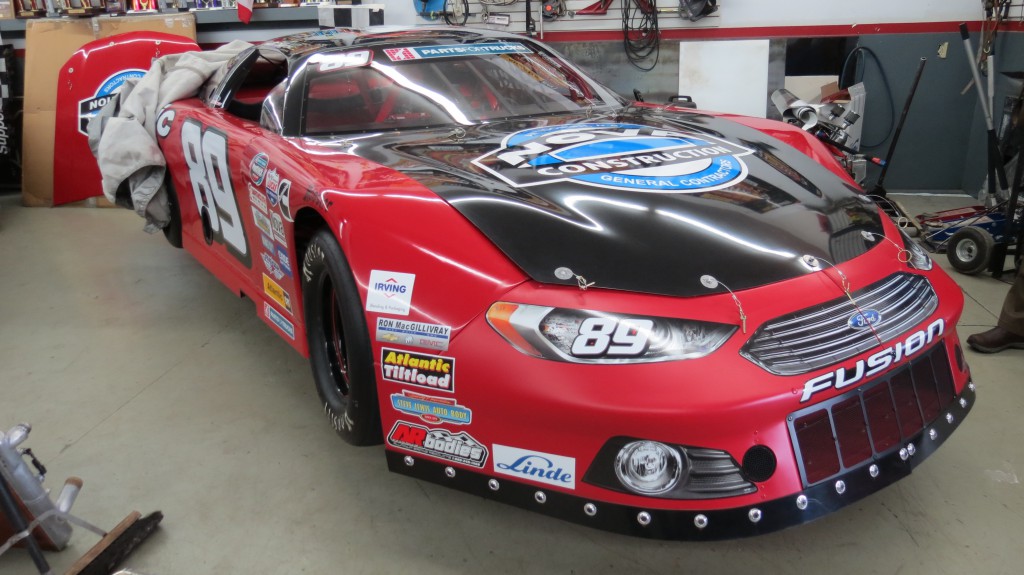 While in Nova Scotia my cousin Bill and I had the opportunity to visit both Rollie MacDonald’s and Donald Chishom race shops. Andrew the crew chief for Rollie’s team and George the crew chief for Donald’s cars, were a great help with questions I had. These were shops that looked like mini McColl race shops with multiple awesome looking race cars….and awesome facilities.
It seems that Port City is a popular builder for these cars although other builders are supplying cars for the Maritime Pro Stock Tour racers.
It looks like our car will be legal, but more than likely lack some of the high dollar race parts these teams will be using like the 2 speed $13,000 transmission. We will be running a 2 speed Richmond but doesn’t compare to the machine technology in the transmission the teams I met will be running.
I am looking forward to heading east for this the IWK 250, we need to raise the funds to make it happen and then give it our best shot with what we have. Not everyone has a brand new car, but many do. Being in that race, near the town I was born, Truro, with many of my family there, will be a big win for us. What happens on the track will be no different than any other night of racing……although it sure would be nice to once race a Late Model that is state of the art. Meanwhile our Late Model is being worked on and it will be much better than the car we ran the past 3 years. More on this race and our Modified and Late Model progress very soon.
….here is one of the cars in Donald Chisholm’s shop. 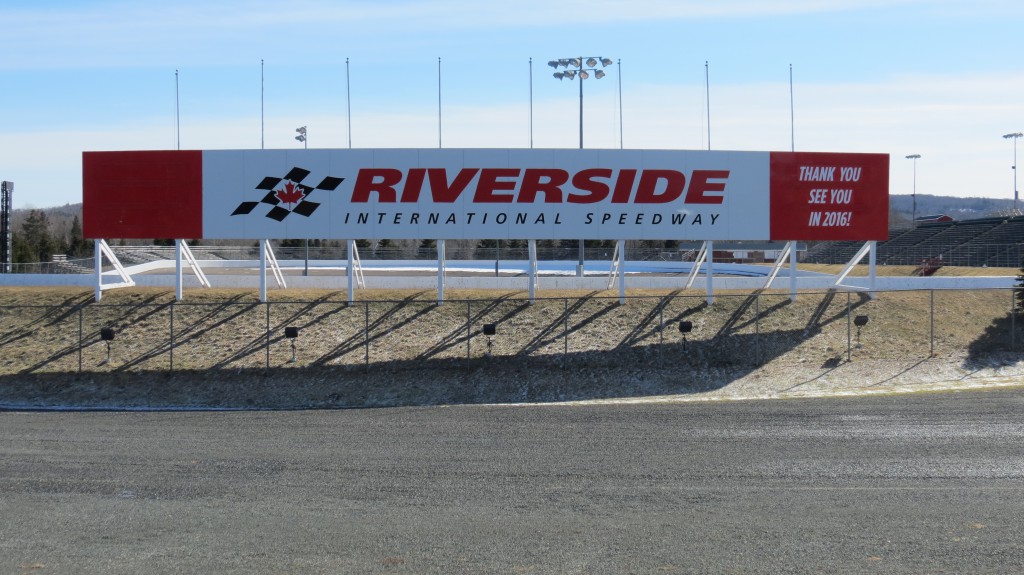 I had a great opportunity this week to go to Nova Scotia and look deeper into making the IWK 250 a reality for our team.

My cousin Bill Elliott offered to take me around to some of his friends who owned businesses in Nova Scotia.

I had proposals made out to give to potential sponsors. They were all exactly the same. I was willing to run the sponsor name on our car all year, as well as put their logo on our web site. Joe Chisholm from Race Time Radio offered to interview any sponsors we got on his weekly Canada wide radio program.

In total we saw six businesses. There were two that were not available to see, we left proposals for them to consider.

We visited 2 race shops. Rollie MacDonald, who owns King Freight, had a nice shop in Pictou, and Donald Chisholm who owns Nova Construction and Riverside International Speedway had his shop in Antigonish. We were able to ask questions to the 2 crew chiefs Andrew from Rollies team and George from Donalds team. Both teams had 3 to 5 cars in their shops and these cars were beautiful, well prepared and fully equipped. We had a great time meeting all these awesome people, who even gave us info we needed to get our car close to what it needs to be to race with these wild Pro Late models.

When we were done on Sunday we had accumulated 4 show presentations. We plan on being at the Walmart in Antigonish on the Friday night before the race. It is located very near the track. We will be at the Canadian Tire store in Truro, both of those for our sponsor Quaker State. We couldn’t get any sponsorship through Nova Trucks in Truro, but Rod wants us for a display on the Wednesday or Thursday, the same day we will be at the Canadian Tire. The other show we are committed to is in Bass River Nova Scotia for a fund raiser to support the local Fire Department.

I can only make this race with help from local businesses in Nova Scotia. The 8 proposals we gave out will hopefully be fruitful for us. My cousin Larry will work with Bill on another potential sponsor who they both know very well who operated his business out of Halifax, but lives close to my cousins.

I will update this big race once commitments start coming in. The IWK 250 will cost us $9000 and we need to raise that to make it happen. I’m praying about it, have been for all our racing endeavours for 2016. I hope it comes together. If so, it will be one of the biggest if not the most prestigious high light racing events of my 48 year career……..more info to come once things fall in place. 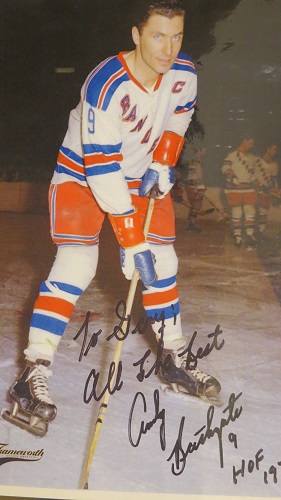 This week Andy Bathgate my favorite all time hockey player passed away. He was an amazing graceful gentleman player and my hero. My favorite sports number was 9 because of him.
As everyone knows, I had two racers who stuck out for me as heros Glen Schurr who inspired me so much I ran #36 on my race cars from the beginning.
In 2009 I had 2 Late Models and one was #9. I called Mr. Bathgate and asked him if I could put the Ranger logo and his number on the hood of my car. It was the same I had been doing for decades with “36 for Schurr”. He said yes and asked me for my address and sent me some pictures of him.
I followed him very closely. New York Rangers were my favorite team because of Andy Bathgate although Leafs were a close second.
I was so excited when he came to Toronto. I remember he came to Leafs for Dick Duff and Bob Nevin. Don McKenney also came, Andy was the Captain of the Rangers and Don the Captain of Boston then. Leafs won the cup that year taking the series in 7 over Detroit.
I was watching game 7 when the puck was in the Leaf end and it came back to the point but it bounced over, or got by Pete Goegon. Andy Bathgate got a break away and scored the Stanley Cup-winning goal for the 1964 Maple Leafs. It was the first goal of the game and the Leafs won 4-0.
When he scored I yelled, going nuts. I made such a loud noise it scared my Dad who was in the kitchen playing euchre. He came running to the living room and said “what’s going on, why were you screaming so loud”? I realized for a second I might have woke people up in the next city, so I said in a shy but happy voice “Andy Bathgate just scored for the Leafs”. Dad looked at me and shook his head saying “what the hell is wrong with you”!!! I was just excited and Dad was okay after that.

Some of his NHL stats:
* Played for Rangers for 10 years
* Won the Hart Trophy, MVP in the NHL scoring 40 goals in 1959
* Tied for points lead with Bobby Hull in 62, Hull won the Art Ross, he had more goals
* Had 56 assists and 28 goals in 1962
* Scored the winning goal in 64 playoffs game 7 giving Leafs the cup
* 1967 NHL expansion season he went to Pittsburg Penguins and scored their first NHL goal
* Scored in 11 consecutive games. That record lasted until Gretzky broke it
* He is famous for contributing to one of the greatest innovations in NHL history. Renowned for the strength of his slap shot, during a game against the Montreal Canadiens, Bathgate shot the puck into the face of Jacques Plante, forcing Plante to receive stitches. When Plante returned to the ice, he was wearing a mask. That started a trend that continues to this day
* WHL MVP (1970)
* A slap shot at Jacques Plante took the glove off Plante putting both puck & glove in the net
* In 1998, he was ranked number 58 on The Hockey News’ list of the 100 Greatest Hockey Players
* He was ranked No. 8 on the all-time list of New York Rangers in the book 100 Ranger Great (2009)
* His sweater was retired on Feb 22nd 2009
* Inducted into the NHL Hall of Fame in 1978

Gary Elliott Motorsports is excited to annonuce that our team has committed to racing at Riverside International Speedway for the IWK 250 Parts for Trucks Maritime Pro Stock Tour on July 16th. These cars are basically Pro Late Models. The full story on how I decided to add this race in my 2016 schedule, all the plans and preparations to date are on our Message Board under Diary of a Season 2016…..get a coffee 🙂 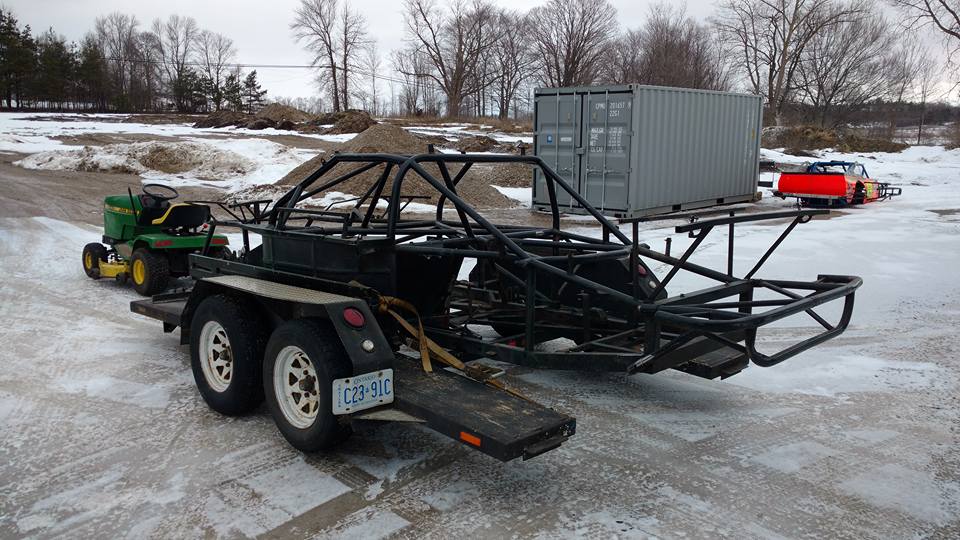 I am happy to report that both our Late Model and Modified are well on the way to being updated and rebuilt in some areas as we prepare for 2016, our 48th race season.
Thanks to the help of Jason Legge my Late Model has been stripped down by Glen Schnurr, at Leggers Race Shop.
Glen has repaird bad or cracked welds and our car will have wide 5’s installed, a Richmond transmission and a 604 Crate engine. Our hopes are to once again be compeptitive in the Late Model class, something we haven’t been since 2012.
The Modified is currnetly at Ron Easton’s shop, Oakville Trailer. It won’t have major changes but it to will undergo safety and equipment rebuild, as well as shocks and springs with the hope of making us more consistent in the corners.
Special thanks to crew member Lloyd for helping get the Mod prepared for Oakville Trailers in Oakville.
More news on our team as progress continues.

Gary Elliott Motorsports is proud to announce that Quaker State will be back as our primary sponsor for 2016. This will be our 43rd season together, a partnership that started in 1974.
I am so blessed and proud to be running the Quaker State brand on our car again in 2016. 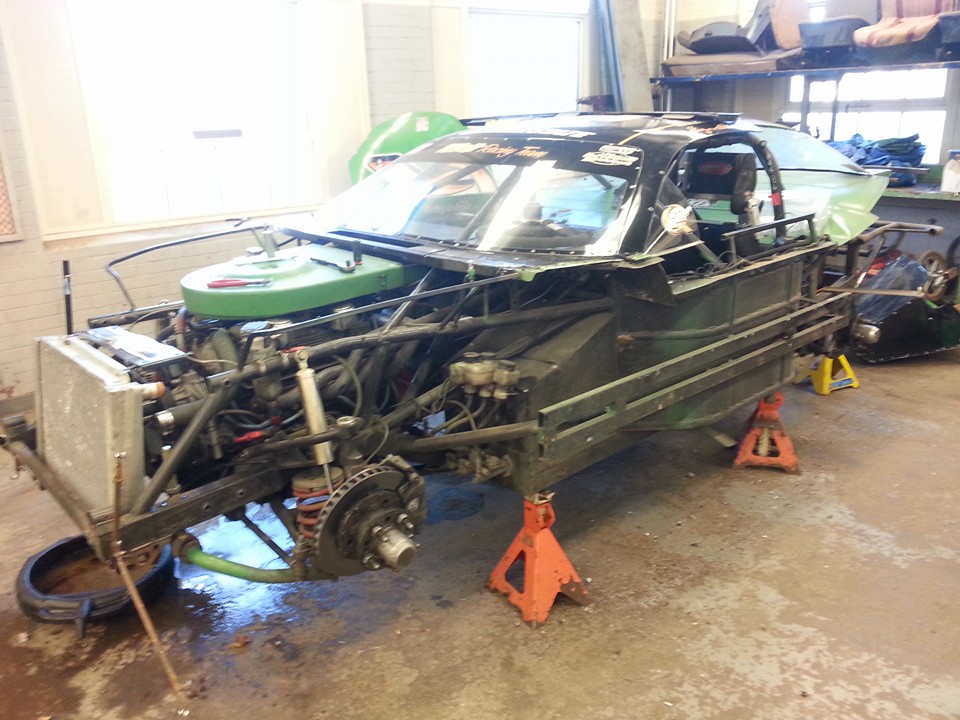 I spent a few days at Westdale Secondary School in mid December. During that time, I was asked if I would like to leave the car there and have the students start to strip the car down….I said of course!
Once Christmas break was over the students got busy and here is some of their progress. They were ready to pull the engine and transmission out today. I will update more pictures as they come through. The 2016 season has officially begun.