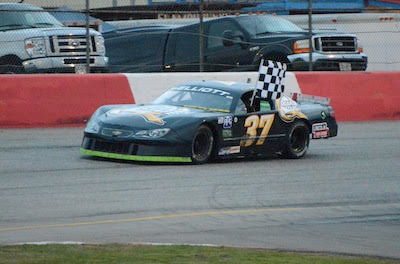 I was looking forward to racing Kawartha Speedway again, but the weather cancelled the Saturday race for all southern Ontario tracks I compete at. I decided to head to Delaware for their Mod Open Invitational. I knew I would be in trouble, with no crew and old tires, but I’ve raced most nights at the big half with old rubber. That story is on Diary of a Season 2016……this Saturday is the last points night for Flamboro Speedway. David is tied for first and I’m sitting 8th, 10 points ahead of 9th and 10 behind 7th.
On Sunday we will race the Modified with OMRS, looking forward to getting back to Sunset again.

After losing last Saturday at Full Throttle Motor Speedway because of rain, and Sauble the week before that, our team has lost 3 races in 2016 because of rain. I usually book 28 to 35 races per year figuring I will lose a few to rain. In 2015 we ran 32 nights and 34 nights in 2014. This year we may only get 24 and that’s if it doesn’t rain this weekend. I will post on here if the show gets cancelled. Right now it looks like rain, and has been calling for wet stuff all week.
Next weekend, September 24th and 25th, we race our Late Model at Flamboro for the final points night of the year, and Sunday we head to Sunset to race our Modified with the OMRS Modifieds……please no rain!!!!!
Thanks for visiting our site.

Over the years we accumulate a lot of trophies. David and I decided that we would donate some of our trophies to young race fans for special events.
On Saturday night I was able to give away these 3 trophies during intermission. We gave away 3 on August 6th and then won the feature in our Mod. We didn’t win the feature in the Late Model but we did have a good night finishing 7th and 6th in the two features, our best night this year at Flamboro.
The full story will be posted by Monday on Diary of a Season 2016 on our Message Board.
Thanks to Louie Halliday for coming on the track with me and taking this picture. 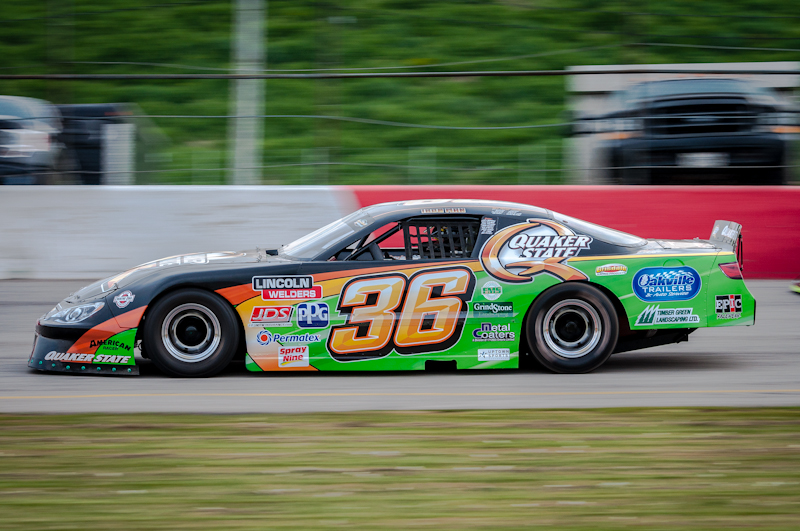 We race our Late Model this Saturday at Flamboro Speedway. Really hope we can get our car better to run in the top 5. It’s been frustrating not able to keep up. Maybe this Saturday we get a better run in our Quaker State Late Model.
Eric Uprichard photo 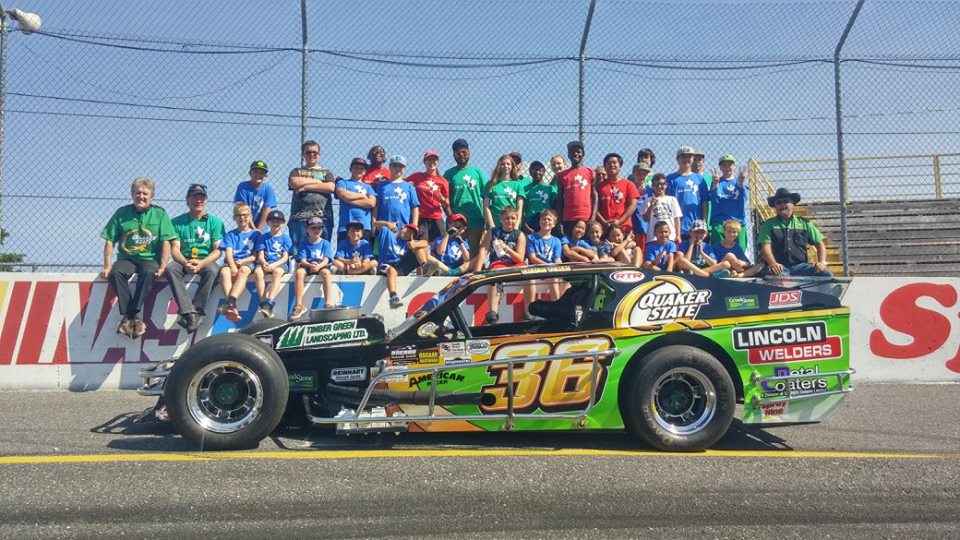 The Scripture Union Kids Camp was a great success at Sunset Speedway. Weather was bad one day, but the kids got double carting the next day.
I was very happy to be involved again with this awesome opportunity to share my love for racing and Jesus.
Special thanks to my sponsors who donated items for the kids, Quaker State, Lincoln Welders, and Permatex. We also got books and nice bags donated by Open Doors, as well as kids sponsored by Timber Green Landscaping and Uptown Hockey Management.
Thank you to Lloyd Lavariere for his help and bringing Daisy to keep Buttons company. 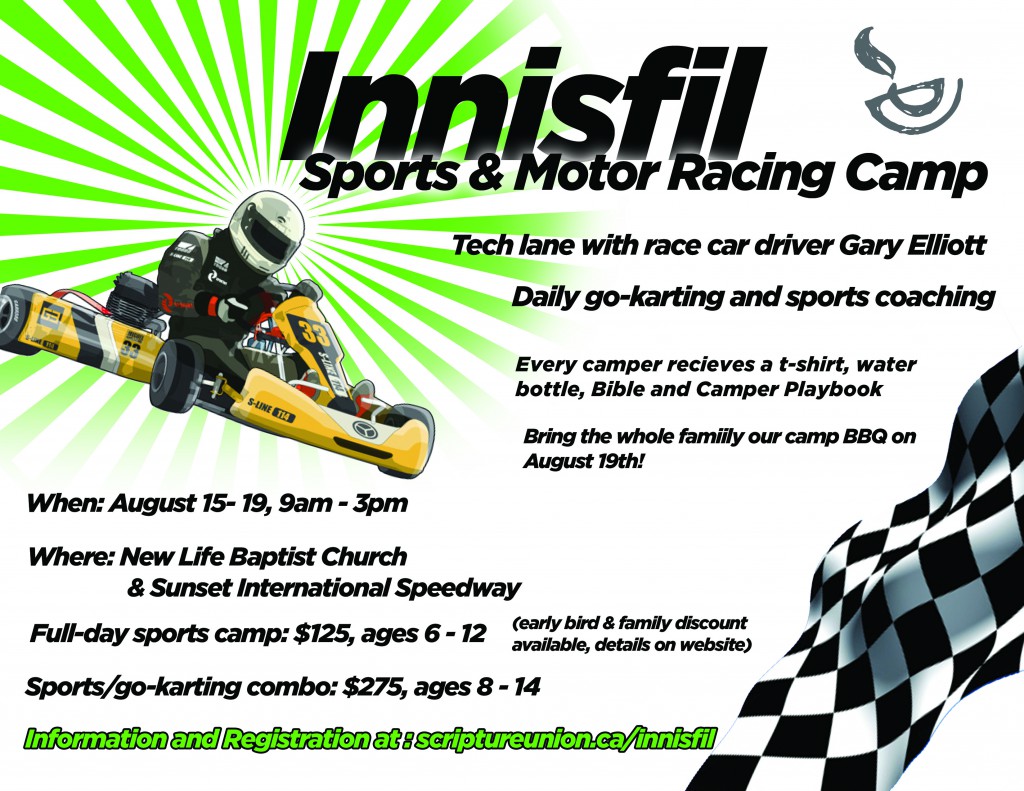 I will be at Sunset Speedway from Monday to Friday for the 4th Race Camp through my sponsor Scripture Union.
This is such an honor for me to share my passion for racing and Christ in the 4 or 5 seminars I will do each day with the Kids.
They will have an assortment of games each day, meet and do things with our Modified, and get to race go karts each day.
Thanks to my sponsors who provided prizes for the Kids
Quaker State, Lincoln Welders, Permatex and Grind Stone Property Management. Also special thanks to Uptown Hockey and Timber Green Landscaping for sponsoring 2 children each.
I won’t be home until late Friday night, or early Saturday morning because we are racing at Delaware Speedway Friday…..this will be the last race of the Chase, then elimination rounds start.
If you want to get in touch with me call my cell please, I won’t have access to emails or fb.
905-928-8086
PS……..all the race stories are completed on Diary of a Season 2016.
Thanks for visiting our site 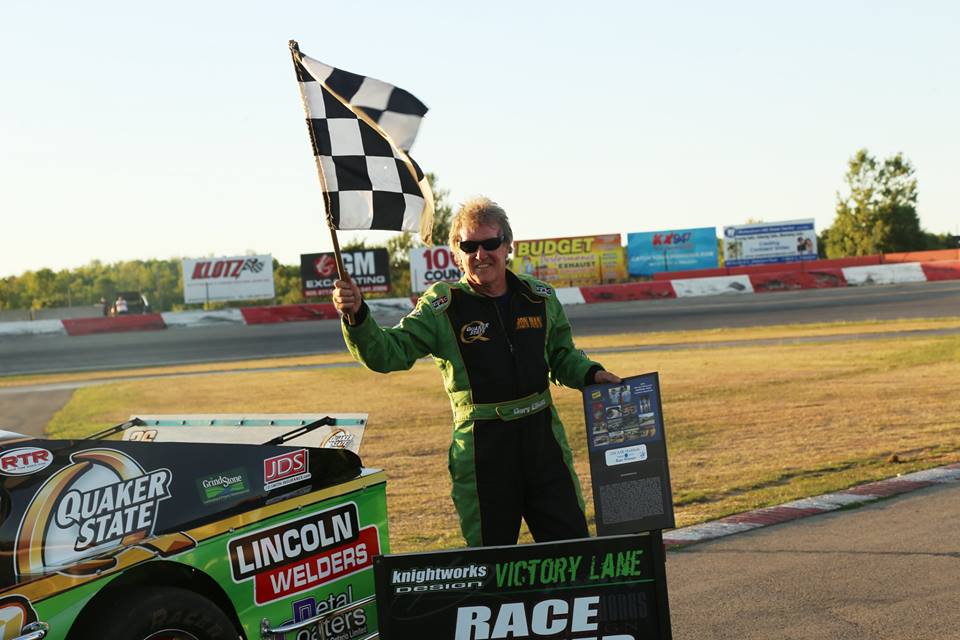 What an awesome night for my team. OSCAAR ran Twin 20 lap features, no heats. We won the first feature, and 3rd in the second feature giving us the Don Biederman Memorial win as well. This was our first OSCAAR Mod and 39th career feature win.
The plaque we won is amazing “Don Biederman Memorial OSCAAR Modified Race Winner”. Having that plaque is truly an honor.
Special thanks to my crew, family, sponsors and friends for their constant encouragement.
Louie did an awesome job spotting. Lloyd was unable to make it, or any of my crew, except Buttons, but the win was for them as well.
We have one more Chase race, Delaware August 19th, then we start the elimination rounds at Sauble Speedway August 27th. Eight cars will start the Chase, we are qualified now 3rd in points,
At intermission I came on the track to give away 3 trophies from my collection to young fans. I wanted to give these trophies to the kids because they meant a lot to me, and the fans of our sport mean just as much.
Thank you Lord for such an amazing blessing.
Photo by Ashley McCubbin 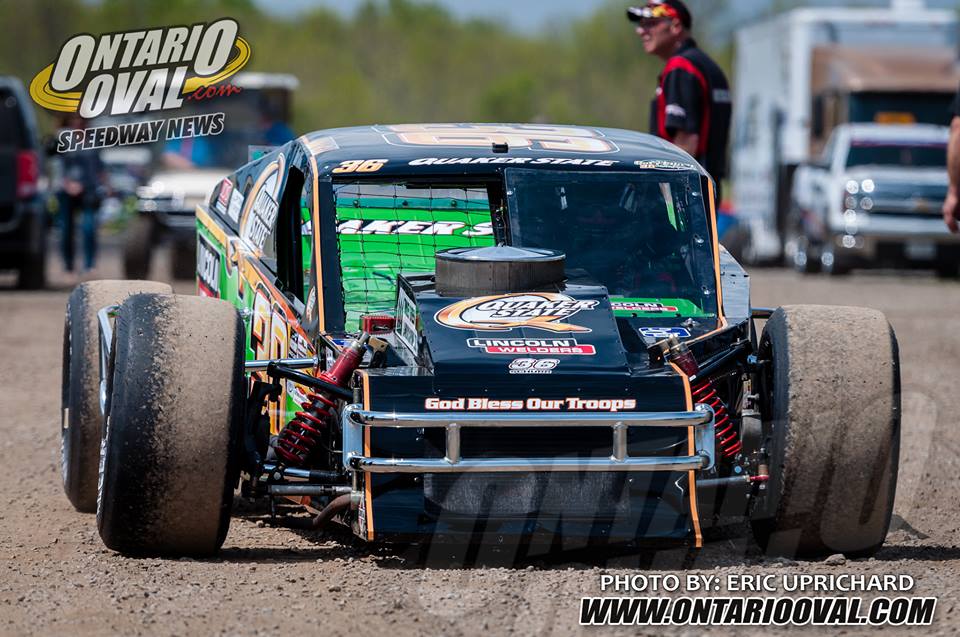 There are 2 more races left in the OSCAAR Chase, the Flamboro race tomorrow night and then Delaware on August 19th. Those 2 races will finalize the contenders for the Chase.
Then the Elimination rounds begin on August 27th at Sauble Speedway where one car gets eliminated, then 2 more at Full Throttle Motor Speedway and Flamboro Speedway, leaving 3 to race for the 2017 Championship at Peterborough Speedway’s Autumn Colors . I have a few weeks to get in shape, I am still exhausted from our trip to Nova Scotia with no rest returning. But I will be okay, tho I do need to work out a little.
Thanks for visiting our site