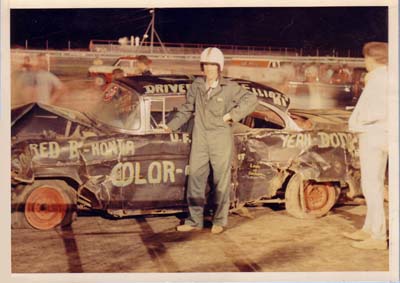 I loved going to stock car races when I was a kid. I had a few favorite drivers,
Terry Dickenson in the Hobby Class, Vic Parsons in the Late Model and most of all, Glen Schurr in the Super Modifieds. I would eventually take the #36 for my races cars after my hero Glen Schurr, although #9 was a thought because of my favorite hockey player Andy Bathgate who was #9 and so was Vic Parsons. I would use the number 9 twice in my career, in 1985 in the Hooby class when I painted my Coupe like Bill Elliotts, and in 2009 when I ran full time at both Delaware and Flamboro Speedway.
I used #9 on Friday nights, and of course #36 the rest of the season on my other car.
But about this picture.
Since I couldn’t race when I was 20 (no drivers license) I decided to try Demolition Derbys. I always enjoyed them. I was a bit rowdy at 20 and was determined not to sand bag. I hated to see guys stay out of the action until near the end. They would save their car and come in to clean up when everyone else was all but destroyed.
I had an impact on sandbagging by 1968 when I convinced promoters to give the win to the driver that put on the best show…..if 2 or 3 did and they were still bashing it out at the end, then give it to the last car running, not the driver with little damage who survived and won because he stayed out of the battle.
This 1955 Chev was bought for $50, it was rusted pretty bad. It had an inline six and ran quite well. I always used the name “Color Me First” on all my 20 demolition cars, winning 6 of the 20 shows I was in.
I literally beat this car to nothing and we got the win and $150. That was 2 weeks pay. The smile lasted for weeks.
I will post a few more Demo wins.
I will be posting a picture soon of my finished Pro Late Model for 2020.
Thank you for visiting our site. 🙂 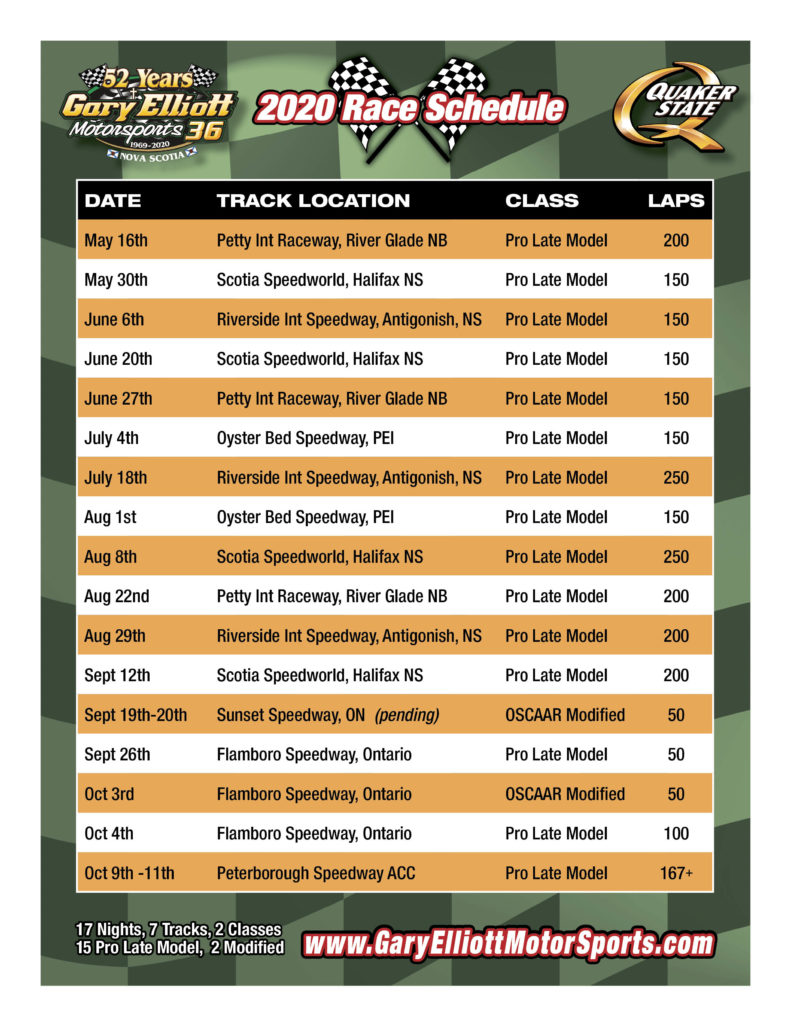 Here is our 2020 race schedule. Hopefully we don’t have any cancellations. Our schedule includes the full Maritime Pro Stock Tour and 5 races in Ontario. The only tentative race now is the Fall Velocity at Sunset Speedway in late September. The reason that says “pending” is because of any rain outs we have here and they use that date as a make up….hopefully not….I’ll be racing my 2019 Modified for the Wilson Family.
What’s not on our schedule is the many shows we will be doing this spring and summer.
I have 7 events already scheduled here, and will do shows in Ontario in the fall.
Thanks for visiting our site.

Here is a picture I recently received from 1969. This was my second car in 69′.
My first car got beat up pretty bad at Cayuga when it stalled on the back chute. I got of the car on the passenger side…”under green”. I was upset the yellow didn’t come out as cars were whizzing by. Finally it got hit, in the trunk where the engine is, and basically written off. I was really upset, and when I went to get my $5 for finishing last I complained quite loud to Bob Slack…”My car is a wrecked because the starter wouldn’t throw the caution”. Bob was so gracious and apologized. I calmed down but was heart broken because I wanted to race and my car was done. He looked at it and said “I’ll give you $25 for it”, that was equal to half a weeks wages, so I took and bought this car. My Dad welded the cage in it and we were back racing.
The car was sponsored by St Clair Do It Yourself in Toronto, at St. Clair and Runnymede.
Don Roth lettered the VW.
Thanks for visiting our site 🙂 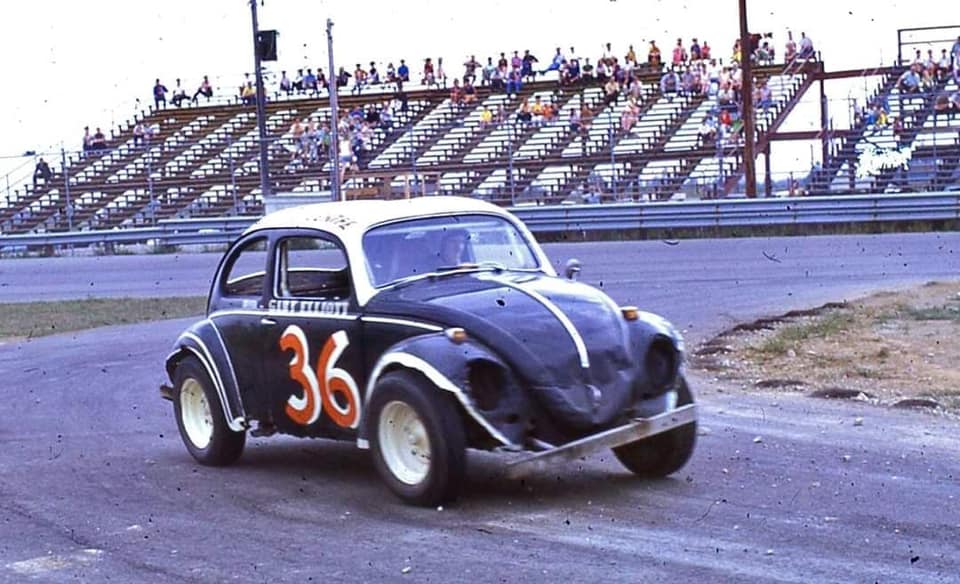 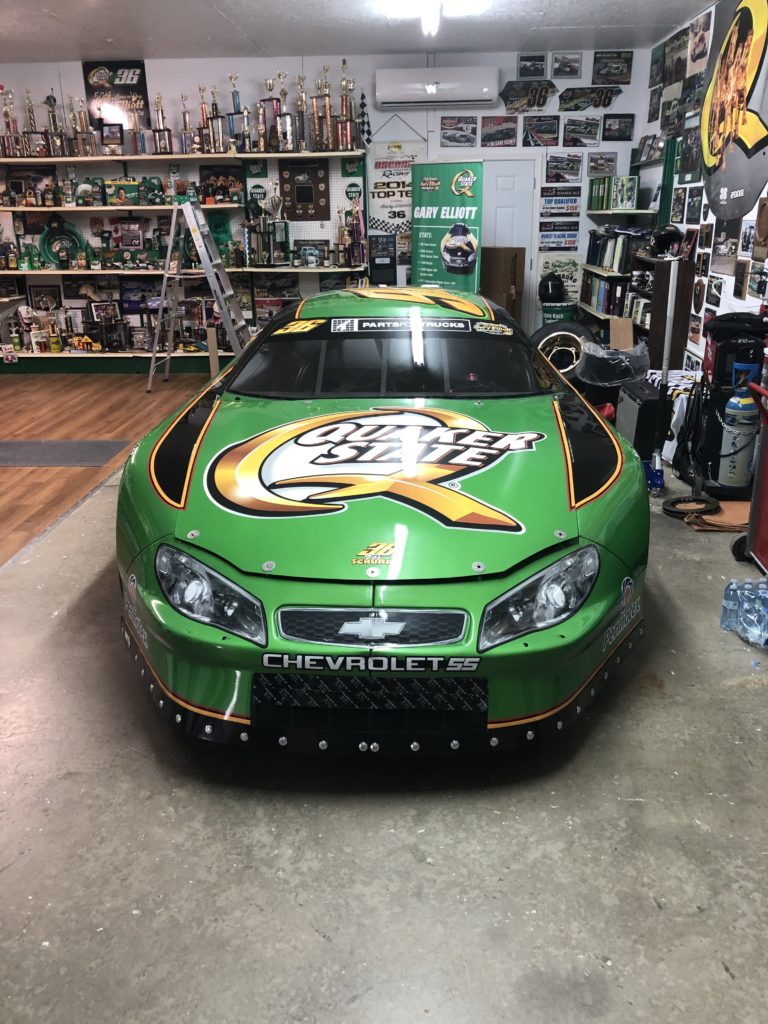 Here is the front view of our new paint scheme. The sides are not finished yet but when they are I will post more pictures. Kirk Alexander is doing this and he is very good. He really likes what Steve Lyons has done over the years and is trying to create another homerun.
Thank you for visiting our site 🙂 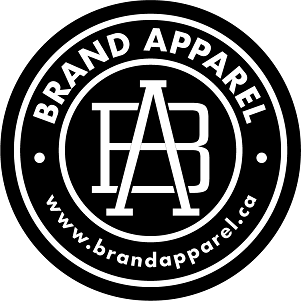 Brand Apparel joined us in 2019 and were a great sponsor. They will return in 2020. I very much appreciated the support from Doug from the beginning of our relationship. Plans are in place to have some T-shirts and Hoodies available for our fans and these will be provided by Brand Apparel.
Click on their logo on the right side of our website, or any of our sponsors, to see the wonderful products and services they offer. I am currently getting Strictly Hydraulics logo and web site added to our sponsor partners.
Pictures of our car will be posted this week.
Thank you for visiting our site.

I am happy to announce that Strictly Hydraulics will be with us in 2020. They were an associate sponsor in 2016 and 2017 buying tires for our team when we raced the IWK250 both those years.
I am proud to run their logo in 2020 and hope to make this, as with our other valued sponsors, a lasting relationship.
Look for more updates soon. Our car will be completely lettered in a week or so and I will post pictures then.
Thank you for visiting our site. 🙂 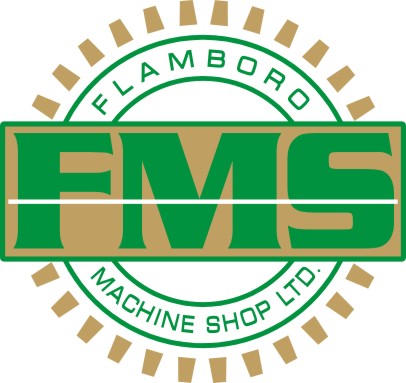 I am pleased to announce that Flamboro Machine Shop, FMS, will be back with our team in 2020. John has an amazing business doing high end fabrication for the all industry, commercial, construction, steel plants etc. John has supported many racers over the year building, repairing and supplying things they need for the season, but also during the season. Located near Flamboro Speedway, John attends most of the races and it’s not unusual for John to make or repair a part for a race team he doesn’t know to help them get back on the track.
His logo will be on our 2020 version Pro Late Model.
Thanks for visiting our site 🙂

After leaving Ontario our team lost approximately 8 sponsors, most all due to us leaving Ontario and not being able to represent them fully in the Maritime Pro Stock Tour. I am very thankful to have had these wonderful businesses support me in 2019.
We are very happy and proud to gave gained our first new sponsor in Nova Scotia, PYE Chevrolet Buick GMC. We will have our car on display at the Dealership in the spring prior to the 2020 start of the MPST season. I am very proud to have PYE Chevrolet Buick GMC part of our sponsor team. Please support all our sponsors by clicking on the logo on the right side of our main page to see the wonderful products and services they offer.
More news coming soon as our Late Model is getting lettered at this moment and should be completed by next week.
Thanks for visiting our site 🙂