This Saturday we will head to Petty International Raceway for our second race of 2020. We’re hoping our radios work this time. They were new in the off season but have been nothing but static.
We had some help during the week from Brent Rowley of EIT Radios, hopefully they work away from home. If so I can race more aggressive and not worry about where I am on the track and causing or being in a wreck.
If it rains there is a rain date set for Sunday.
Thank you to my crew and sponsors for making this all possible. Their support has been incredible.
Thanks for visiting our site. 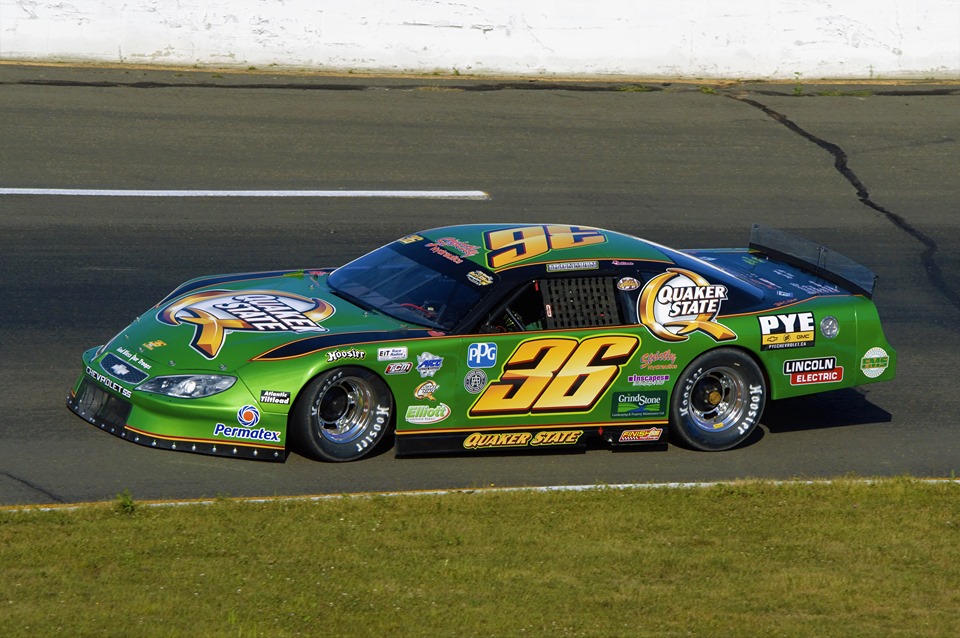 New car
New track
New crew
We got the first race of 2020 in the books on July 4th. Ironically this was our 43rd different track and Petty at that, quite a coincidence.
We had trouble all day with radios and that hurt us terribly, but all in all it was a good test for me in the car and for my crew in the pits. I must say they did a fantastic job and they are sure keen to work and help on the car, just like my crew in Ontario.
We had issues with the car, I think mostly learning how to drive the track. I was up and down concentrating on the car and knowing it, as well as a track I had never raced before.
We didn’t finish due to an electrical issue with the cooling fan, and had to leave the track with overheating. I think we finished 14th of 18 cars but not really sure yet.
The full story will be on Diary of a Season 2020 tomorrow, I have a bunch of good pictures like this one from my good friend Ernest Pothier who took pictures of my cars in Ontario before he moved here. Overall Petty was a good shake down.
Thanks for visiting our site. 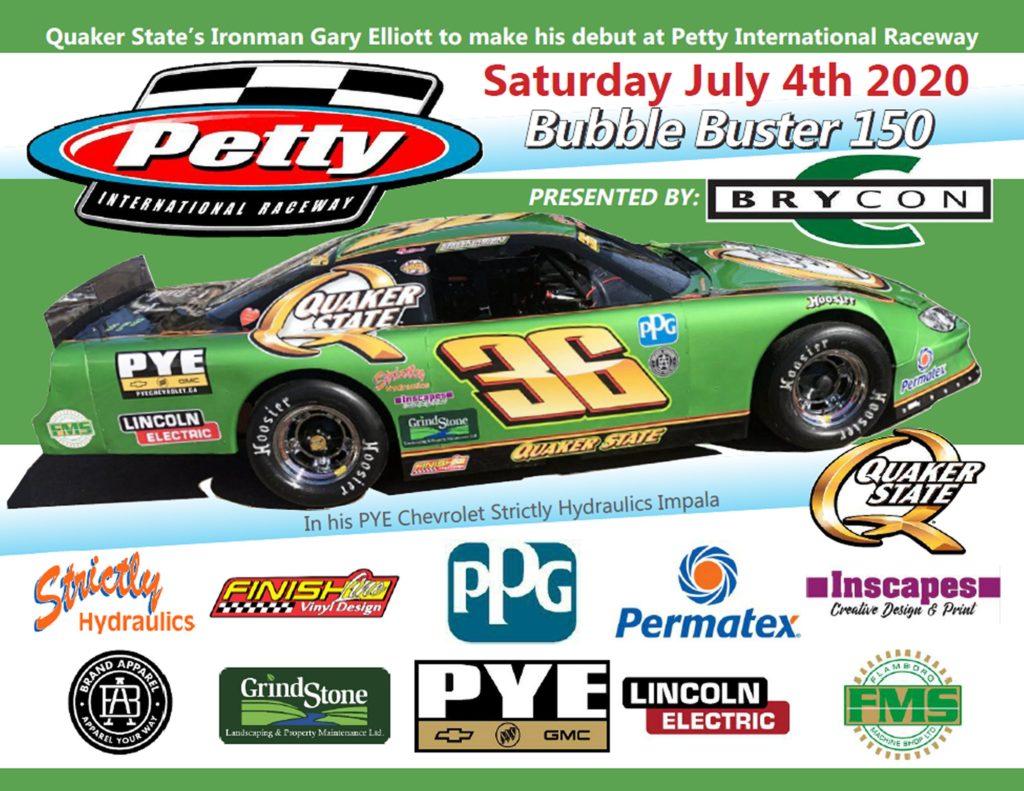 Getting excited for this big race July 4th. Haven’t raced 150 lapper in decades. That’s not counting a heat and maybe last chance.
Yes I am somewhat nervous. New car, never been moved yet, and never been on Petty International Raceway before.
I’m waiting for gaskets to come in to fix a fuel leak that started recently, I really need them by July 2nd to finish the car.
Looking forward to this race to promote my sport and my sponsors.
Thanks to Sue Chisholm for making this ad for me.
Thanks for visiting our site.

With borders finally opening in the Maritimes, race teams will get their first race of 2020 at Petty International Raceway on July 4th.
The Brycon Construction 150. It will be a 150 lap race for all Pro Stock Late Models from Nova Scotia, PEI and New Brunswick.
I hope to get out Friday night and practice there, so far there has been no opportunity to practice even moving the car, let alone racing it.
I hope to have an advertisement to post soon.
Thanks for visiting our site. 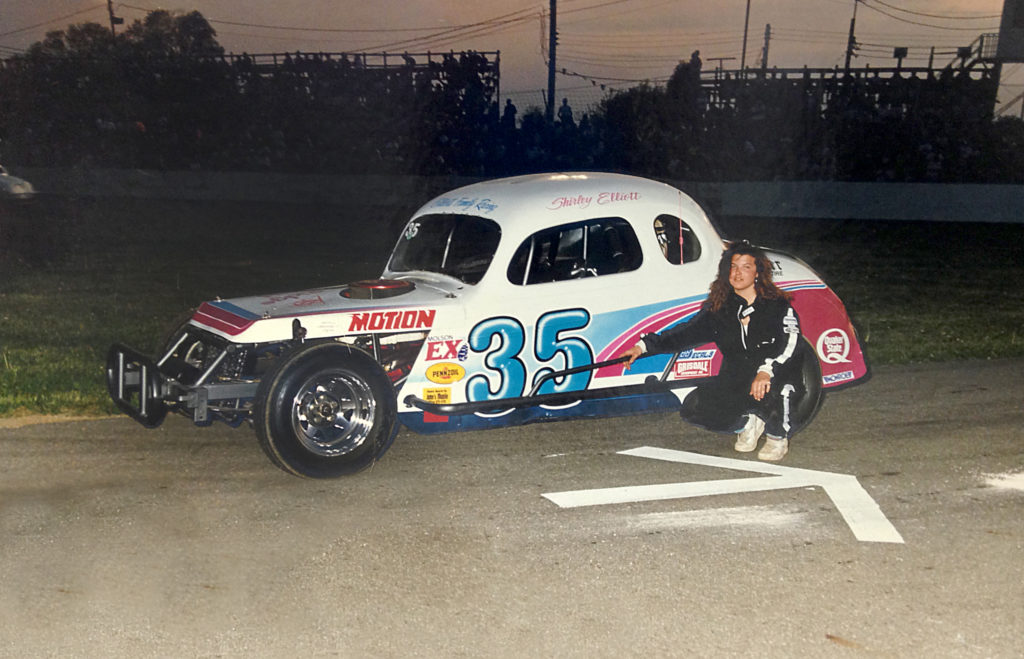 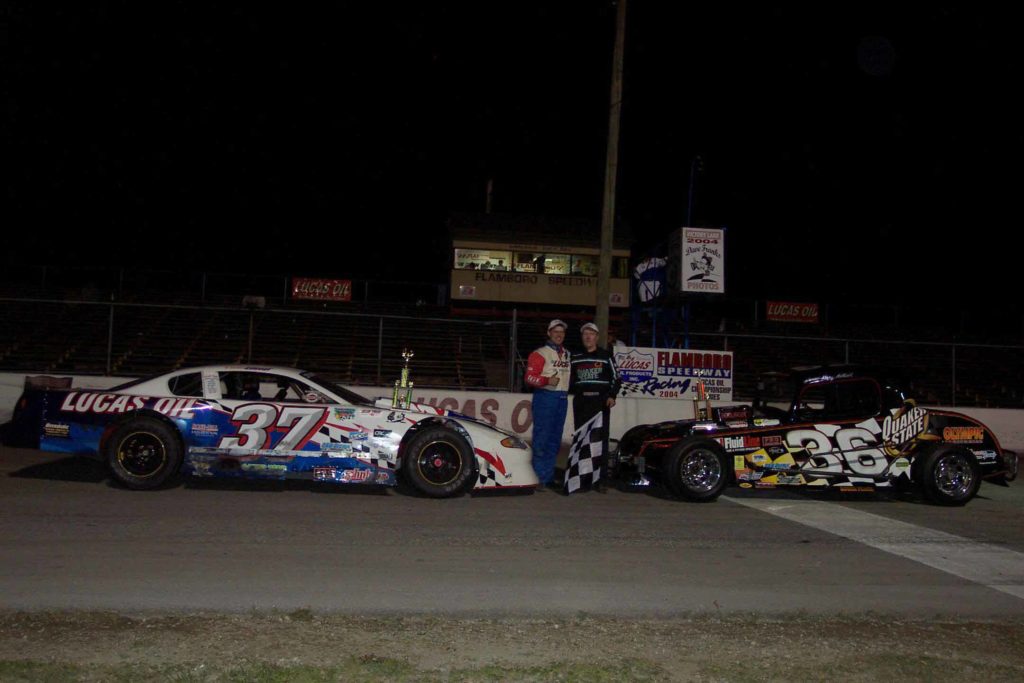 It was David’s first year racing Late Models, and my final full season with the Hobby/CVM class.
Both of us won our features, David winning his first in a Late Model, with many more to come, and it was my 2nd feature win of 2004. It was truly an amazing night. 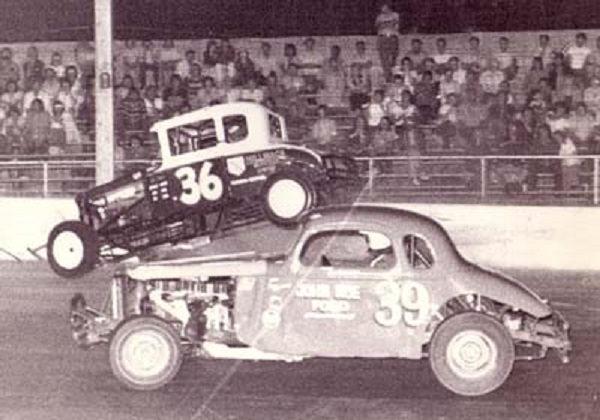 There are a few types of accidents that are not good. Fire is the worst, a roll over can be just as scary, a blown engine taking you for the slide of death, and a stuck throttle. The roll over happens sometimes very slow, other times can be a few rolls (my worst 1973 had 4 flips at Speedway Park). I only had one fire and it was minor, caused by a blown inline six engine. I would never want to be in or see anyone inside a car on fire….never.
The stuck throttle? That’s another very serious deal all together. It’s usually unexpected, and a driver won’t know it until he lets off the gas deep into a turn. The results are usually physical injuries, possible concussion, broken wrist,a ton of damage, very costly Both roll overs and fires can be expensive but not as much as a head on into the cement at high speed.
Jamming on the brakes won’t overpower a stuck throttle, slow it down a little but not much. You don’t have time to shut off the ignition either, the distance from brake application and the wall isn’t very much, maybe 4 car lengths max. You react mostly by just holding on. Seeing the wall come at you that fast, especially if the car is travelling 100 mph takes your breath away. Even at 60 to 70 mph can be very bad is scary and can brake some bones, not to mention twisting a chassis and busting many front end parts.
I’ve had 7 different roll overs, 1 fire and 2 stuck throttles. I don’t like any of them but the stuck throttle tells you the next time you’re in the car “do you really want to go in that deep again”?
This picture was my first stuck throttle at Pinecrest. The car hit so hard it lifted the back off the ground 3 feet and drove the seat belt buckle (a round one back then) deep into my stomach. I got out of the car but was really sore almost sick to my stomach.
My good friend Danny Shirtliff #39 drove under me. I think he said “I’m glad that wasn’t me”.
Quite a good shot by the photographer and you can see Danny looking at me during this nightmare.
Thanks for visiting our site. 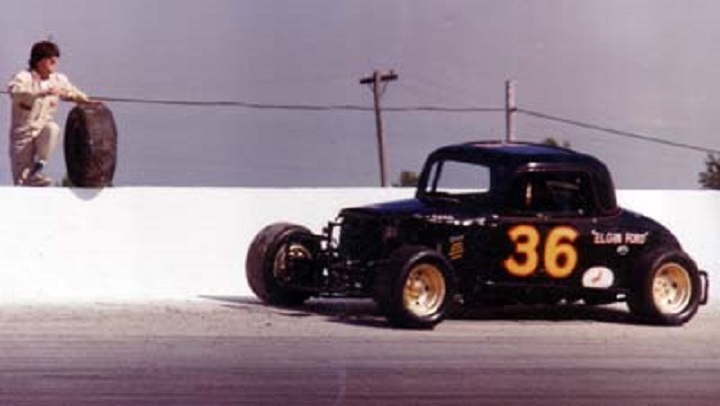 I want so bad to promote my sponsors for 2020. Quaker State, Lincoln Electric, PPG, Permatex, Grind Stone, FMS, Brand Apparel, PYE Chevrolet, Buick, GMC and Strictly Hydraulics. I will get a chance on June 5th for another I race to get some exposure. The Maritime Pro Stock Tour season has been cancelled until the end of June. Covid 19 is the culprit. As long as new cases keep coming up the season will continue to lose dates. Part of the problem is the borders between PEI, New Brunswick and Nova Scotia are currently close, so no travel, and if anyone tries to go from one border to the next they must quarantine for 14 days.
Businesses are slowly opening up but with borders closed and at least half the MPST field from PEI and New Brunswick, we won’t be able to race. z
Lets hope for no new cases in June and no more deaths in Nova Scotia. There have been no deaths in PEI or New Brunswick, and 90% of those in Nova Scotia are from the same nursing home. It’s really sad and once this is over the world needs to take strong measures to make sure our seniors and those with weak immune systems are looked after.
Here is a picture of my car from 1981. During hot laps the right rear axle shaft broke in the middle of turn 3. The wheel bounced over the wall…..as you can see I got it.
Thanks for visiting our site.