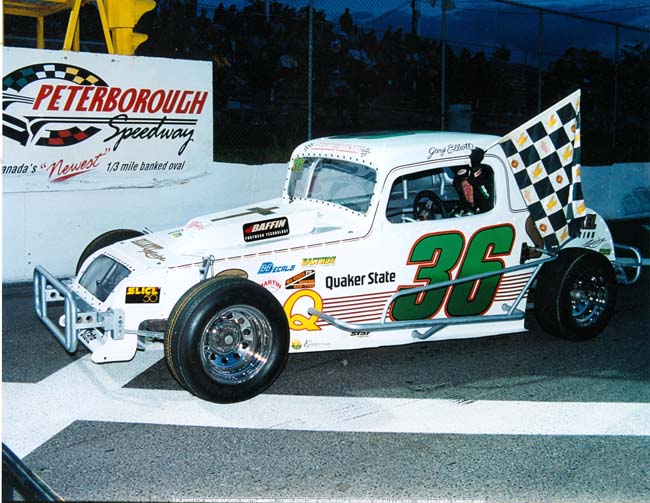 In 1999 we had our first complete new race car, built by Ray Hughes at Jim Wards shop. At the end of 98′ I asked Ray what I could do to make my car better. I wasn’t able to do much better than a top 4 every week. It was him, David and Rob Mass who were winning consistently.
Ray looked at my car and said “this is a piece of s%^&, you need a new car”. I asked him what was wrong with it and he pointed out several logical things. One being the rear springs, they were too short, only 36″, he recommended 54″. Then he asked me if I would like to drive his car in hot laps the following week, I said sure.
I drove his Coupe for about 10 laps and it was excellent. The only thing was my helmet was slightly hitting the roof roll cage. When I pulled into the pits Paul Fisher motioned me to their pit. When I got out he asked me how I liked it and I told him the 2 minor things I would change. He said “well if you weren’t 100% happy I am very surprised because your fastest laps were “2 hundreds” off Rays fastest. That settled it for me and in the winter of 98 I called Jim Ward and he had Ray build me a new car.
We won the 1999 Championship that year, our 2nd in my career and it felt incredible to win another Championship, but 2 years after my disqualification. That car would win a bunch more features over the next 5 seasons before I moved up to Late Models. In 2004 we were leading the points. We won 2 features but blew up 2 engines. It was a frustrating season, but this was a great car. It’s now in Michigan, but I sold it here in Ontario.
More pictures to come
Thanks for visiting our site.