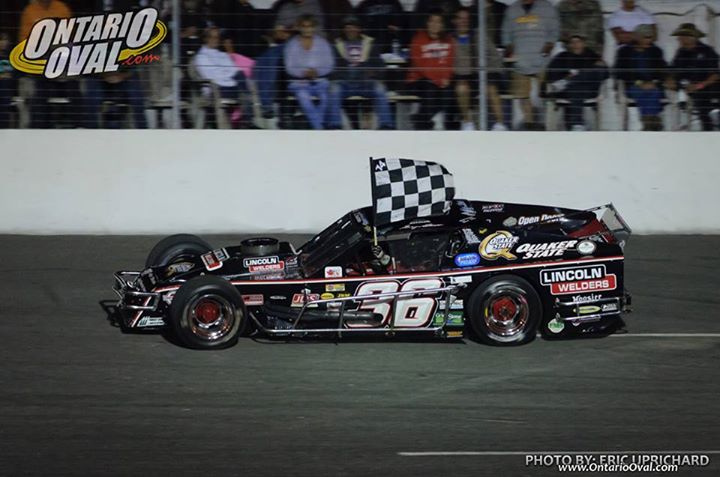 The season opener for the Modified is finally here. I am excited about 2015, our 47th season, but much discouraged about the look of our car because of jacking up the roof. I won’t let that interfere with our goal to chase for the points Championship. I am looking forward to racing this car and having fun with the OSCAAR Mod teams and fans.
There is no rain date for this race, and that is sad. Last year we ran a full show both days. This year we have one show with no rain date or make up date, so I hope rain stays away.
Special thanks to my crew, Marty, Matt, Billy, Jon, Karen and Paul for supporting us in 2015. I know they won’t make all the races, but hopefull most of them. Llyoyd recent joined our Late Model team, as did Jack and Zach, two students from West Dale high school.
I would also like to thank all our sponsors for their tremendous support for this coming season. Quaker State, Lincoln Welders, JDS Insurance, Timber Green Landscaping, Grind Stone Property Management, Open Doors, Scripture Union, PPG, Permatex, McGuiars, Uptown Sports Management, Oakville Trailers, The Black Bull, PCS Postma, Creative Edge, Flamboro Machine Shop, Project Track Champion, Drew Mac and Keepers of the Earth.
I will be doing a report on this race in Diary of a Season 2105 by Sunday.
Thank you for being a fan of our race team. 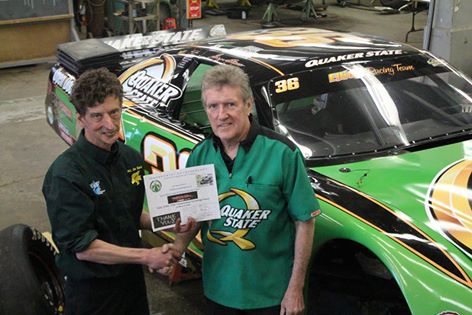 High School seminar a great success. Special thanks to Peter De New for having us at the school and all the students that made it a fun and learning experience.
The students were very courteous. None were on their phones or texting, they were tentative and got into some work as well. Two classes changed the gears in the quick change so we would be ready for Sauble Speedway and two of the students have shown interest in helping me in the pits this year, and they have a cottage in the Sauble area.
It was a great week and I an thankful to have met and spent time with so many good people 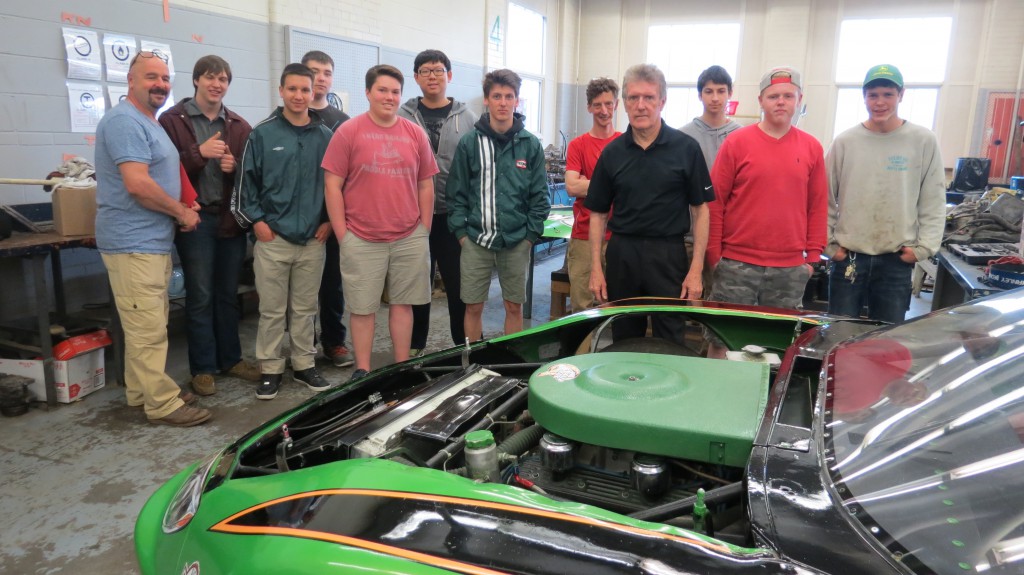 We are proud to have our Late Model at West Dale high school in Hamilton. We were invited by Peter De New to come for Monday, Wednesday and Thursday. Monday was mostly orientaton, showing the students the safety equipment built in the car, explaining the suspension, shocks, why we use stagger and then capped each class off by letting them here the V8. They loved the engine roar. Today they will change gears to make sure we have the right gear for Sauble Sppedways opening night next Saturday.
It’s always fun to take the car to school, seeing how excited the students get, and helping them to understand more about cars they see racing on TV. It also gives an opportunity to introduce them to the automotive industry, from a customer service aspect. Some are taking Auto and not sure if they will continue seeking a career in the automotive industry, but there is also the many opportunities as a counter parts person, service advisor, warranty clerk etc. I’m looking forward to a successful time with the stuents today. 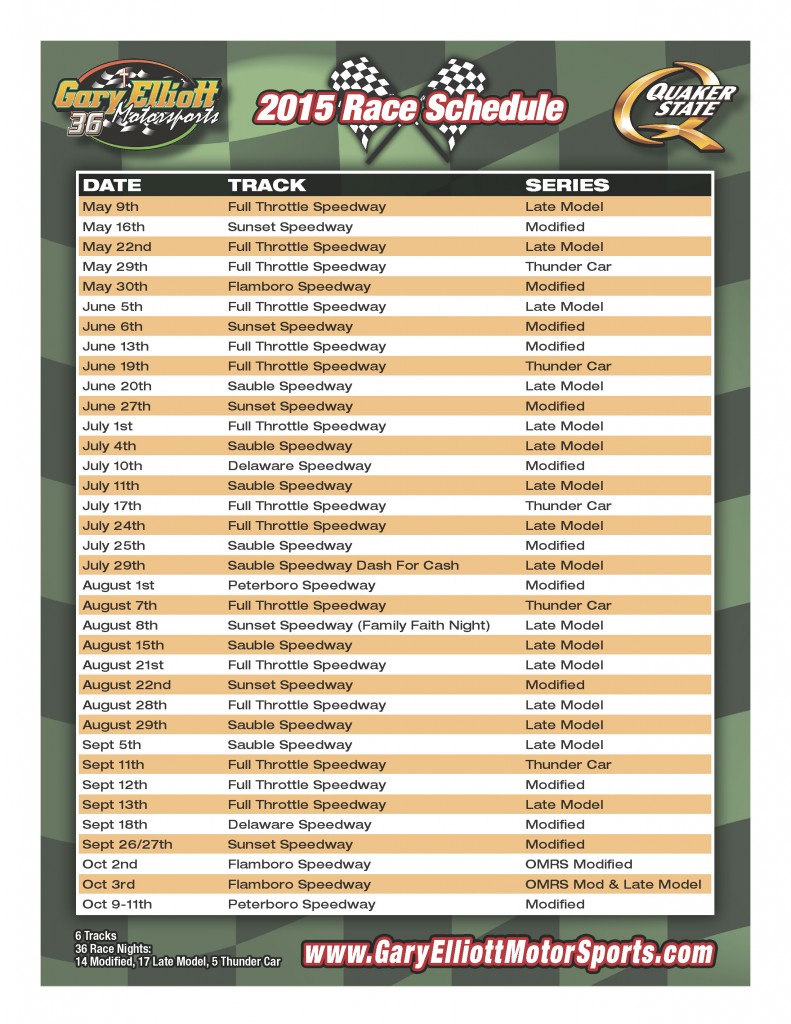 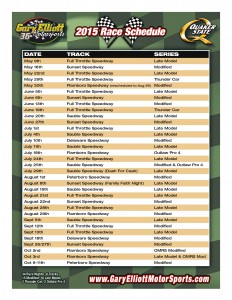 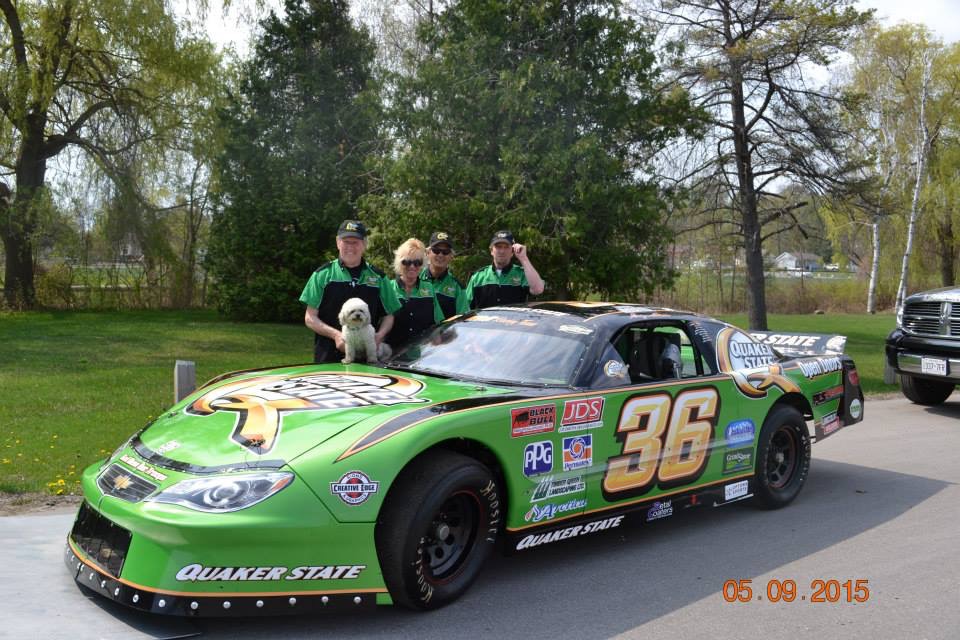 We had a great day at Innisfil Beach being part of Cruisefest, seeing all the boys and girls from the Innisfil Beach Cruisers. Billy, Karen and Buttons joined me for the day.
It got very hot, actually seemed like July at times. The humidity was crazy for May and the threat of rain was throughout the day, although it barely rained a little when we were done.
Our team donated 150 of our Quaker State 40th Anniversary books, and Sunset Speedway donated some grandstand tickets.
We were suppose to race that night at Full Throttle Speedway. Yes, we could have ran Sunset, but they have over 30 cars and we were not ready to be racing in rush hour traffic with no laps on the car since 2014, plus the plan was to race Full Throttle this year and at least have some fun and maybe be a little competitive with our Late Model. But before noon, Gord Bennett called me saying he was going to cancel the racing for that night because the weather forecast was calling for severe rain in the evening with no let up. He cancelled early to save some of the members of the Ontario Sportsman Series, who lived far away, would not travel for 3 or 4 hours and get rained out. A good move for sure.
David wanted me to come to Flamboro to shake the car down but Flamboro was running 10″ Amercian Racer tires. I was considering going but with our 8″ Hoosiers, but I told David John might not let me do that. David asked and sure enough John said he couldn’t open that can of worms and so I parked the car, leaving it in the trailer for our 4 day semiar at West Dale high school in Hamilton.
So all and all, it was a great day and David ended up finishing 2nd and 3rd in both 30 lap features. Flamboro has eliminated heat races now and are running twin 30’s.
Pictures on our seminar later this week.
In this picture is me, Karen, Billy, Neal and Buttons on the hood. 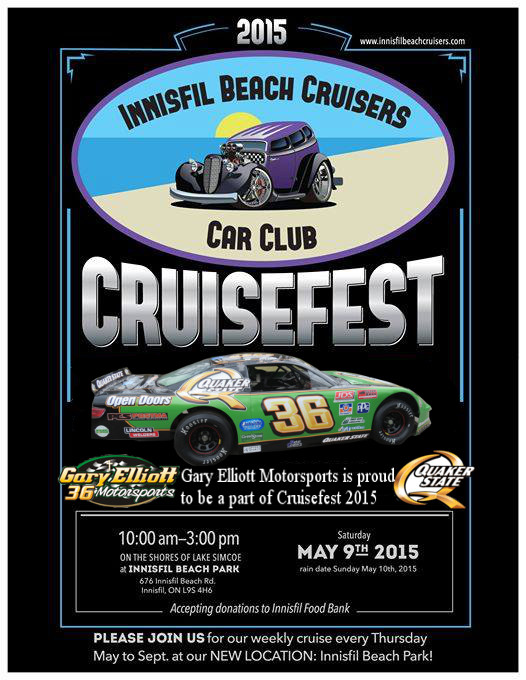 Our 3rd show of the year is May 9th with the Innisfil Beach Cruisers at Innisfil Park from 9 am until 3 pm, and then we head quickly to Full Throttle Speedway, driving right by one of my all time favorite tracks, NASCAR’s Sunset Speedway. I know they will miss me, but they have close to 30 Late Models. I will blow the horn, as we pass by. I am going to miss all my fans and competitors there, and a great bunch of owners, managers and staff. Great people I will see at least 6 times tho when OSCAAR visits, and once in the Late Model for Family Faith Night.
We will proceed west on 89 heading to Varney and Full Throttle Speedway, where our 2015, and 47th season begins.
The last time we raced our Late Model at Varney was 2012.
We are hoping for a great day at the beach with the Innisfil Beach Cruisers and a fun night of racing Full Throttle Speedway. Hope to see some of our fans at both places. 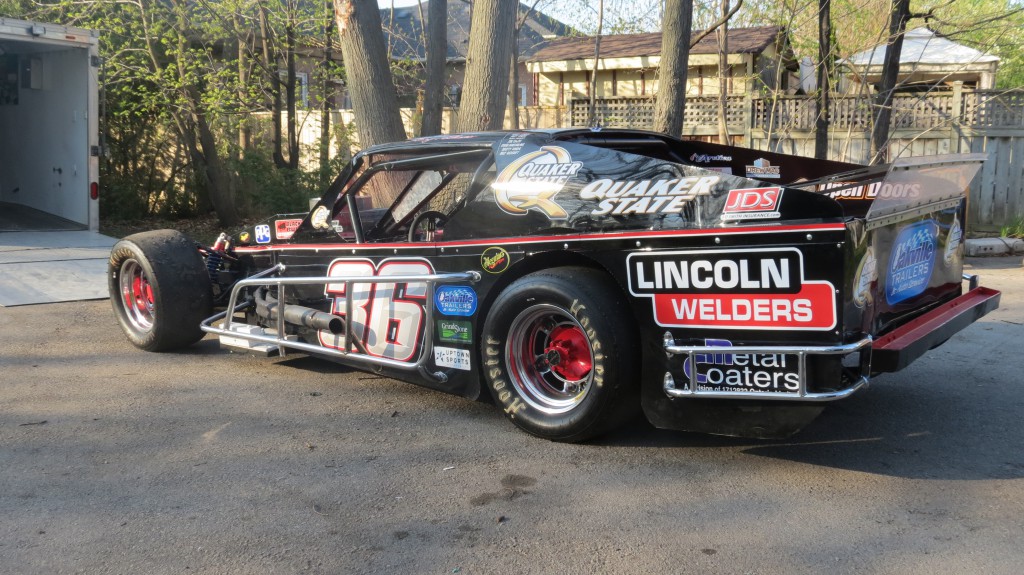 Last year our car was declared legal, and the roof rake passed tech. However, for 2015 the body height rule, measured 10 inches back from the windshield is suppose to be 45″. Ours was 45 at the back of the roof and only 42 at the 10″ point. Ron Easton did some fabricating, to get the car to the proper height and even he is disappointed at the new look we have now. Nothing like a Troyer, little rake, in fact I am very disappointed.
I always loved the look of the Whelan Modifieds, my favorite race car in the world. When I saw Brent McLeans #7 three years ago, I was surprised that the Mods had that look. I was use to the All Pro Modifieds that to me were nothing in style like the Whelan Mod. I found a car I liked and bought it last year and was very excited to have that Whelan style. It was also refreshing that OSCAAR stated they were heading in the direction of Whelan style bodies. Well a 45″ roof at 10″ from the windshield sure messed my car up. It looks like a transit bus now and I am terribly upset and disappoined. I take a lot of pride in my cars and I loved racing and being in this car, but now, at least right now, I have lost a lot of my love for how it looks…..terrible. I expect to be waved down by someone soon looking for a ride, thinking it’s a bus taxi and then have them complain cause there are no seats.
There’s nothing I can do about it now, but I feel like I’ve lost something and maybe I will get over it, but right now I feel kind of awkward getting in this car now. It just dosen’t appeal to me.
Time heals….we’ll see. 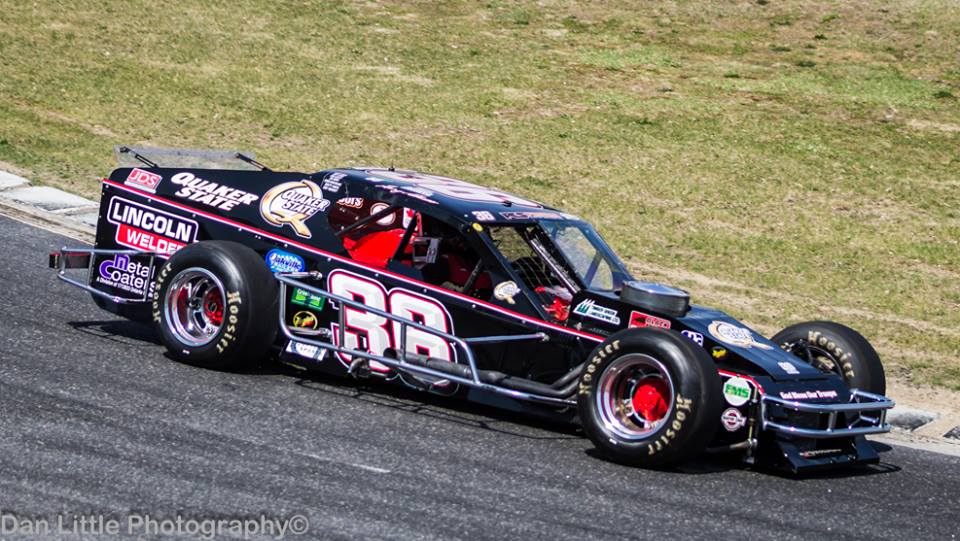 Our crew had a great afternoon testing our Mod at Sunset. Marty, Matt, Billy, Karen and Matt’s son’s Andrew and Jon came as well. Jon will be pitting for us in 2015 and for him, it was an eye opening day.
We had over heating issues each time out and need to get that resolved for opening day. See the full story on Diary of a Season 2015.
I must say, my crew were good, we worked together well and in spite of our bad luck the car was decent.
Chad Strawn, David Baylych, Dan Price, AJ Elms and Corey Horner were there to test, only about 5 cars ready for testing. I used our tires from Autumn Colors, while some teams had 4 new tires for testing.
We have some work to do this week, getting our trailer and truck safety inspected, and now getting the heating issue fixed on the Modified.
Our first race of the season will be this Saturday at Full Throttle Speedway in the Late Model, more on that as well on Diary of a Season 2015.
Special thanks to my crew for coming out, we are all looking forward to a fun year with the OSCAAR Mods.