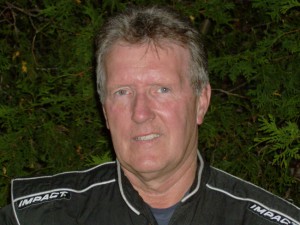 Racing has been a major part of Gary’s life from his childhood. His family attended stock car races at Pinecrest Speedway, Oakwood Stadium and the C.N.E, allowing Gary to cheer for his favorite driver #36 Glen Schurr. The desire and love to race was fulfilled in1969 and remains strong today. In 1970, Gary married his best friend Nonie. Last year they celebrated their 35th wedding anniversary. They have two children, David and Shirley and two grandchildren from Shirley, Gehrig and Lauren.

Gary’s life changed dramatically in 1988 with his desire and need to live a better life. His faith in God through Jesus Christ has given him a hope and joy that he never knew before. He teaches Sunday school to 11 – and 12-year-old boys at Flamborough Baptist Church and plays piano in the Praise Team. Gary also takes his race car to various church meetings and youth events talking to kids, small and big, sharing his passion for racing and his love for Jesus.
In 2005 Gary made the move from the open wheeled Canadian Vintage Modifieds into the ultra fast high tech world of Late Models. To say he excelled is an under statment. Gary won two Feature Events, finished 5th in the Flamboro Speedway Championship, 3rd in the provincial Weekend Warrior Series and won Rookie of the Year. Gary also won the 2005 Media Award for his continuing work in promoting stock car racing.
For 2006 Gary will focus his efforts on the Late Model Championships of Flamboro Speedway and the Weekend Warrior Series. Gary hopes to also drive some events at Kawartha, Delaware and Peterboro Speedways. Gary will also drive in several Canadian Vintage Modified events this season.
Gary’s primary sponsor for 2006 is Quaker State, extending an incredible driver-sponsor relationship that began in 1974 and is now entering its 33rd year.
Gary and Nonie would like to thank all the fans, competitors, promoters and sponsors for making this continuing 37-year journey a most enjoyable, exciting and memorable experience.
1st Corinthians 15:57 … “we have the Victory in Jesus Christ”