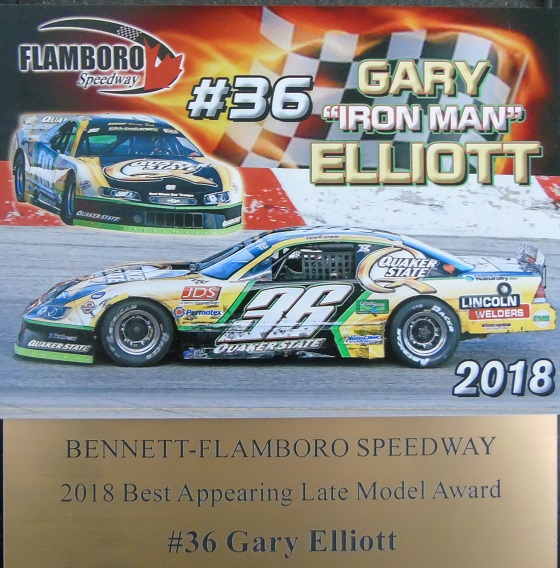 Wow, what an honor for our team to win the Best Appearing Car in both classes for 2018, the second being the Late Model at the Flamboro banquet.
We always try out best to bring excellent looking cars, it’s a priority for me.  This was our 16th win in this category.
I have to thank Steve Lyons and Creative Edge for doing such an awesome job and working with me to get the results I want.   I drive Steve nuts, but his team is creative and I think they like the challenge.
Our 2019 scheme has yet to be determined but it will be different than 2018.
I will be posting on Diary of a Season 2019 updates for the coming season, going to be a great year….and I thank God for all I have and all He has blessed me with, my family, friends, my crew, sponsors and fans.  Such a great journey for me.
Thanks for visiting my site. 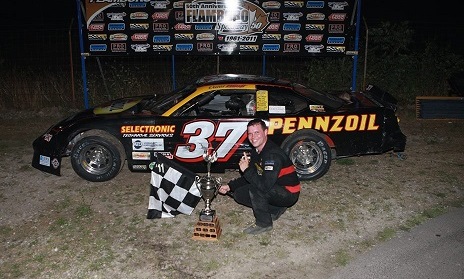 Here is David’s post on Face Book re his announcement to retire.   It is tough for me to know he won’t be back.  I wanted him to race cars from the time he was a child.  I am so proud of my son, he truly had an amazing career with over a dozen Championships, and well over 50 career feature wins.  David will eventually  be in both the Hobby (CVM)  and Flamboro Speedway Hall of Fame, a well deserving honor for such a great racer.

David’s Announcement
I am officially retiring from racing.   2018 was great season to split the driving with my dad. I would like to take the time to thank all the people who have helped me starting with my mom Nonie Elliott and dad Gary Elliott, I couldn’t have raced without them supporting me for the last 18 years and letting me do what I love.

The crew…. I may miss a few from the past but I really appreciate everyone that took time out of there busy schedule to help me, Ed Askin, Brett Paveling, Peter Snook, Wendy Susan, Big Jim Hulzinga, Jim Sweers, Lisa Sweers, Will Morrison, Jonathon Robert Morrison, Dave Lewis, Shannon Scott-Lewis Mike Lewis, Jeff Searles, Dave Pereira, Bob Pereira, Kenny Stenhouse Jr., Kelly Hallettt. Gehrig Halliday Steffon Zoskey, Marty Hagen, Shirley Elliott, Lauren Halliday aka little bumble bee, Philbert Porcupine, Jeff Shaw , Dave Hennessey, Jeff Warnes, Ron Warnes Susan Bates Bill Hyslop, and many more. Without all these people and the sponsors I have had I could not have raced. Thanks to all the friends and fans I have made through racing.

Ray Hughes , Sharon Yost was awesome to race against in the Canadian Vintage Modifieds and Scott Carolle Lyons was a great competitor in the Late Models. Special thanks goes out to Jr Hanley and amazing man that helped me when ever I asked.

Thank you and hope to see you at the track! 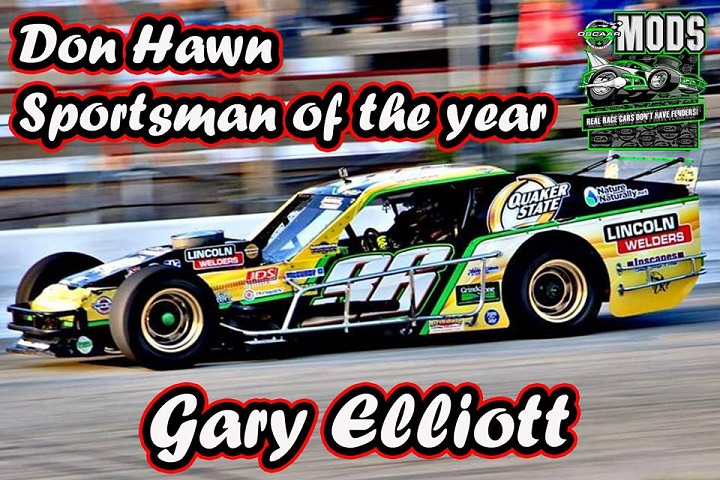 What an honor to win this award, and it means even more when it’s in honor of Don Hawn. 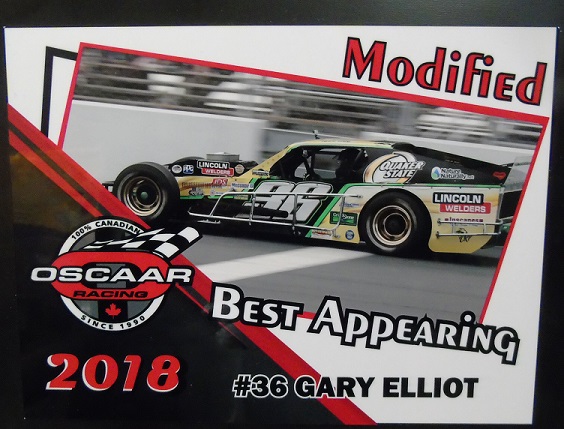 I was so blessed at the OSCAAR banquet, not only to have three of my sponsor reps there, Quaker State, Lincoln Electric and Grind Stone Property Management, but also one of my crew members Stephen and Lucy Lippert.  We won both the Best Appearing Car and Sportsman of the Year awards.
This was the 15th time for our team to win Best Appearing Car,  the first time in OSCAAR Modifieds.  The Don Hawn Sportsman Award was our 12th time winning the Sportsman of the Year award and the 4th time in the 5 years we’ve raced in OSCAAR.
My sponsors and crew had a great night, as did everyone that was there.  It was truly a fun event with lots of couples dancing and boys doing shop talk.  The venue was very nice and the food was awesome. Thanks to Dave Gainforth and his team for putting on an excellent year end festivity. 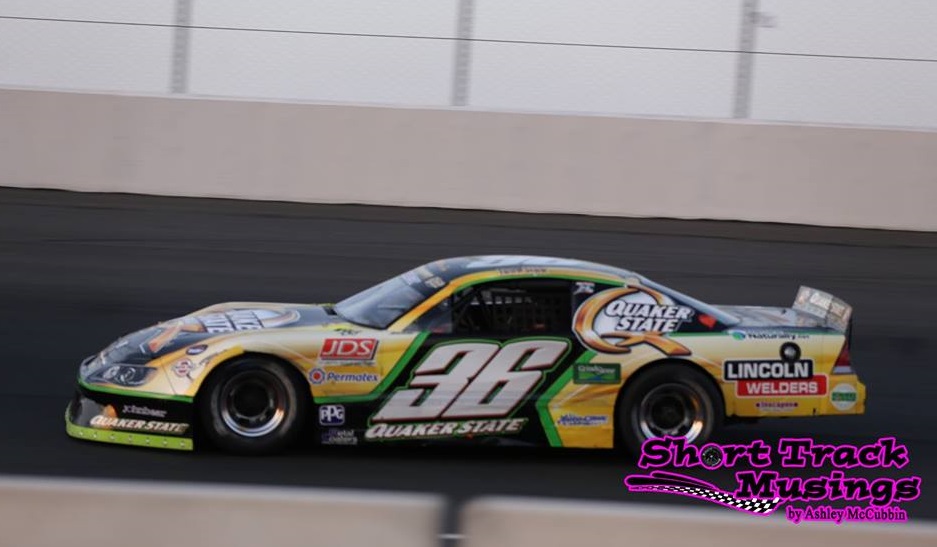 Great deal for someone starting out or wanting to improve.
604 engine (Stefco rebuild) ….VDL carb, tri-y headers…2 speed Richmond transmission .
Lots of spares including 4 more chrome wheels , on board fire system, radio’s incuded
History
Championship car….2014,2015
2nd in 2016 by 2 points
4th in 2018
Finished 19th of 45 cars at Jukasa Speedway 200 lapper
Oil changes done after every week….Quaker State 🙂
$14,500 turn key. Message me if you have any questions 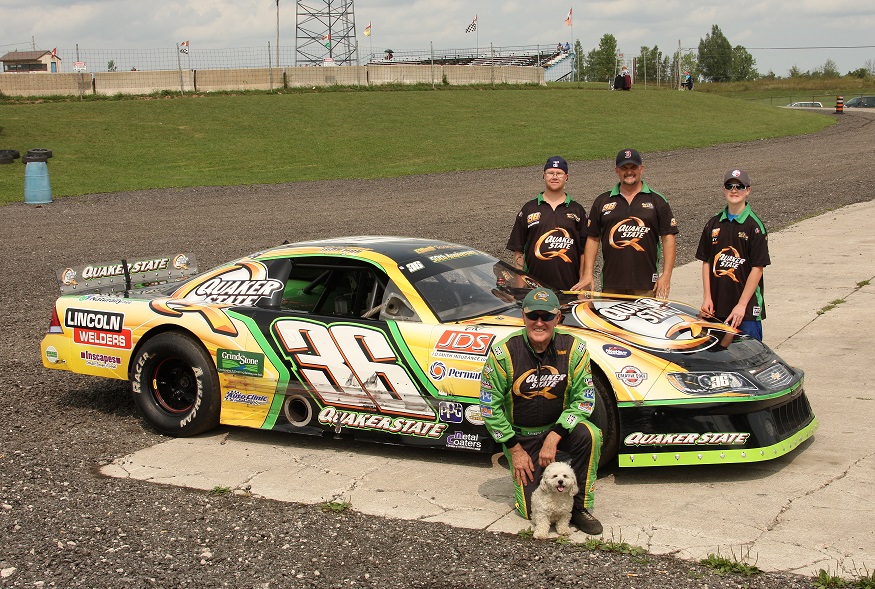 I will be driving the Late Model at Flamboro Speedway tomorrow for the annual Octoberfest Classic.  It will be a cool day but I am looking forward to closing out the season racing my Quaker State Impala, supporting all my sponsors, fans and Flamboro Speedway.
Hope to see you there…….Diary of a Season 2018 has been updated after Peterborough Speedway’s ACC.
Thanks for visiting our site.
Dave Franks photo. 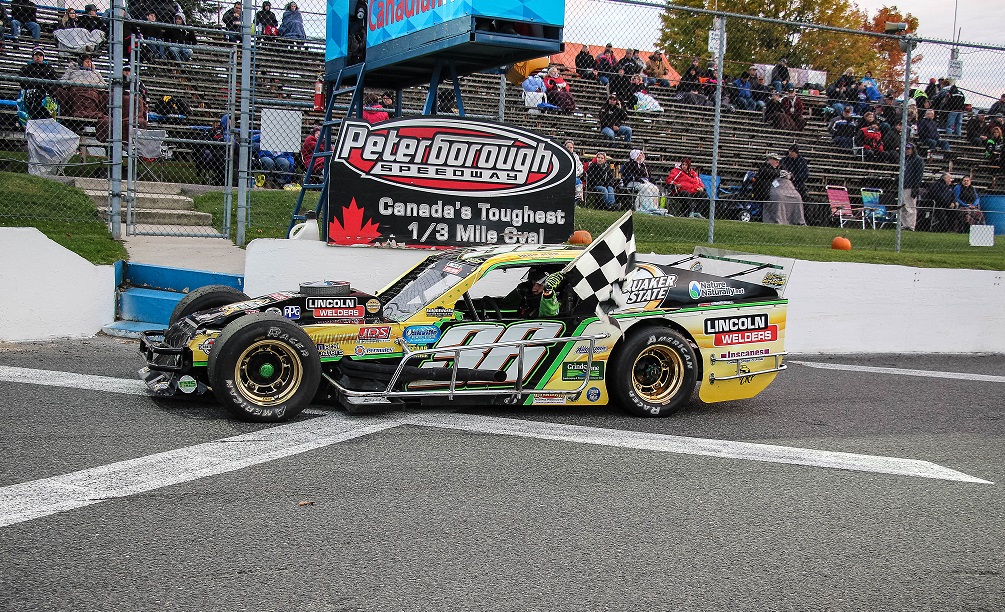 Thanks to Morgan Amber for this photo.   This was one of my toughest wins of 2018 with our heat filled with fast cars including Cory Horner who once restarted outside of me with 4 laps to go.   Good restarts and a great handling car allowed us to win our 7th race of 2018, the most wins since 2014.
We will start rebuilding the Modified in November.
Meanwhile we have one more race for 2018, Octoberfest at Flamboro Speedway.
This will be my 17th night of racing this season, short of our average but still not too bad for me.
Once the season is done I will recap “49 Years of Stats”…..calling it “50 Years of Stats”.
More updates this week, but going to finish Diary of a Season 2018, race report #16.
Thanks for visiting our site. 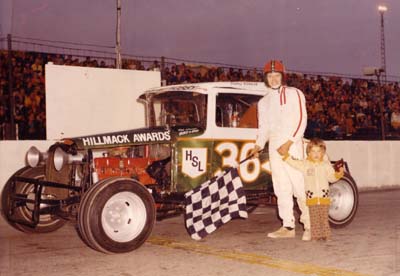 Today is David’s birthday.   When he was 10 years old I told him we were going down town Toronto to meet a friend of mine who was going to give me something for the race car.   We stood opposite Maple Leaf Gardens for a long time and I said “maybe he’s not going to show”.    Then I pulled out 2 tickets for the hockey game….he was very excited.
We sat in row J seat 10 on October 10th 1981…..great night.
I will be updating Autumn Colors Classic Thursday, I finally got lots of pictures.
This picture is from 1974 when David was 3 and I was 27….yikes.
Thanks for visiting our site.